Iceland: Land of Fire and Ice 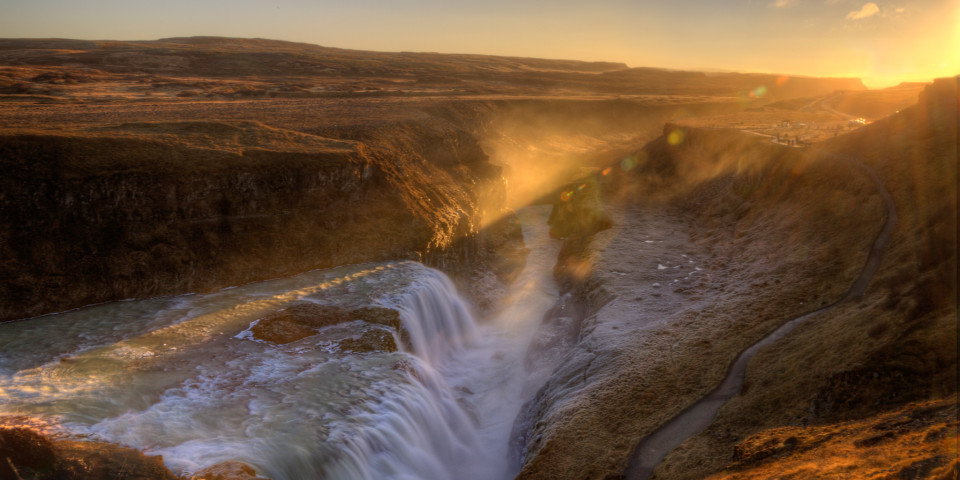 “Land of the Northern Lights and the Midnight Sun, of Viking heritage and the most modern design imaginable, of magical folklore and friendly people – Iceland sits at the top of Europe with an abundance of history, metropolitan atmosphere, sublime dining and plenty of charming experiences for you to enjoy.”

When I read that description I was so excited about my trip because Iceland has been on my bucket list for a long time. Thankfully, the country that lies just inside the Arctic Circle not only lived up to those expectations, but exceeded them by far.

Iceland is a country of extreme contrasts. A place where fire and ice co-exist. This stunning island with one of the lowest population densities of any country worldwide (about 320.000 people) is home to some of the largest glaciers in Europe, and some of the world’s most active volcanoes. Iceland is also the land of light and darkness. Long summer days with nearly 24-hours of sunshine are offset by short winter days with only a few hours of daylight.  Shaped by the forces of nature, the barren landscapes demonstrate the creative powers of the four basic elements—earth, air, fire, and water—in a dramatic way.  Active volcanoes, geysers, bright green valleys, waterfalls, glacier-cut fjords, black sand beaches, and roaring rivers are the most distinctive features of the breathtaking landscape.

During the summer months, Iceland never reaches full darkness, and in the northern areas a Midnight Sun can be seen. Iceland’s stunning landscape also provides areas of geothermal activity. Its cities, although small, provide both a taste of traditional culture and the chance to experience the Icelandic way of life.

Herewith a short overview of my journey: 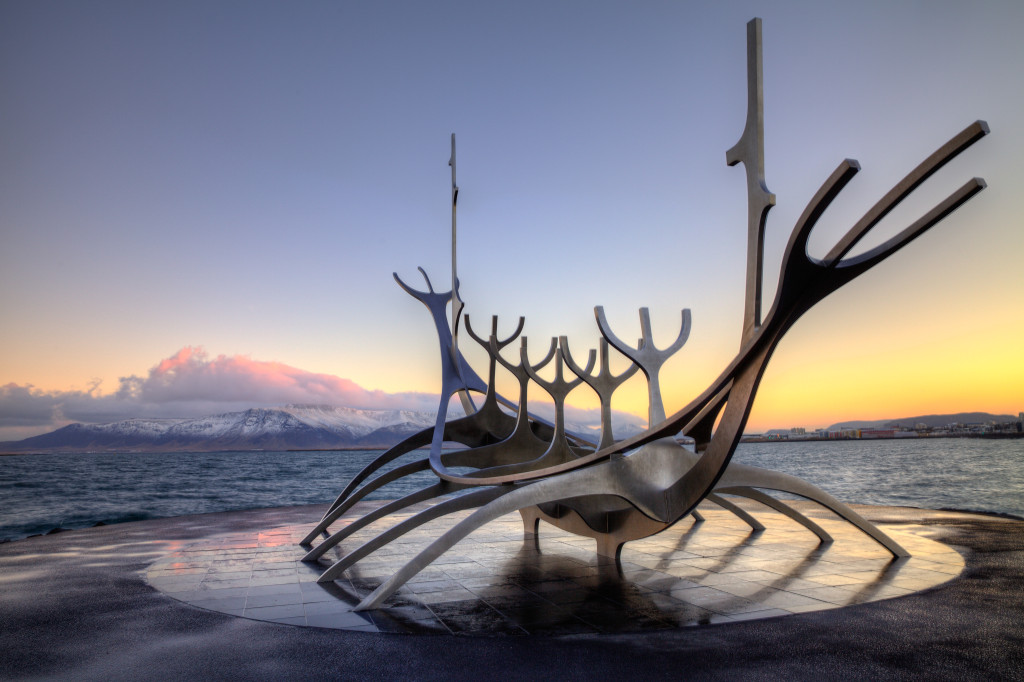 The Sun Voyager (Sólfarið) is a striking sculpture by Jón Gunnar Árnason located on Sæbraut, by the sea close to the center of Reykjavík. Although this sculpture resembles a Viking ship this was not the original intention. The Sun Voyager is a dream boat and an ode to the sun.

The Golden Circle is the most popular tourist route from Reykjavik. This route is covering about 300 km from Reykjavik to central Iceland and back. The three main stops on the route are the national park Þingvellir (Thingvellir), Gullfoss (Golden Falls) and the geothermal active valley of Haukadalur, which contains the geysers Geysir and Strokkur. 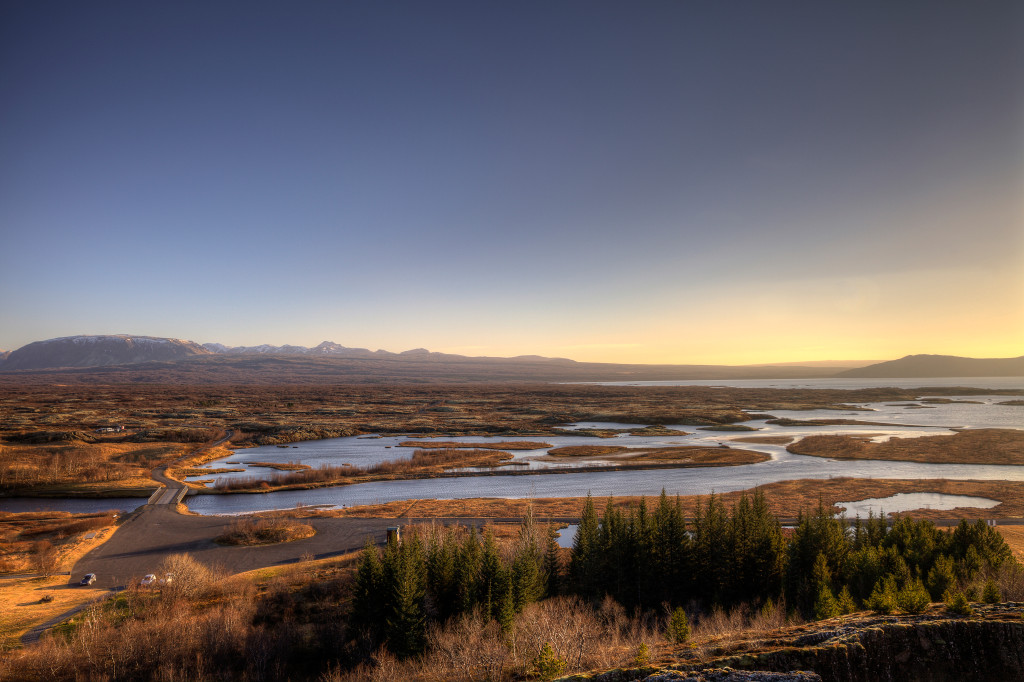 This national park is the most important place in Icelandic history.  In AD 930 the Vikings established the Alþingi, the world’s first democratic parliament. The meetings were conducted outdoors, and as with many saga sites, there are only the stone foundations of ancient encampments. Þingvellir was conveniently located for access from all regions of the country by old overland routes. Many crucial events in Icelandic history took place at Þhingvellir and it is at the heart of Icelandic nationhood. 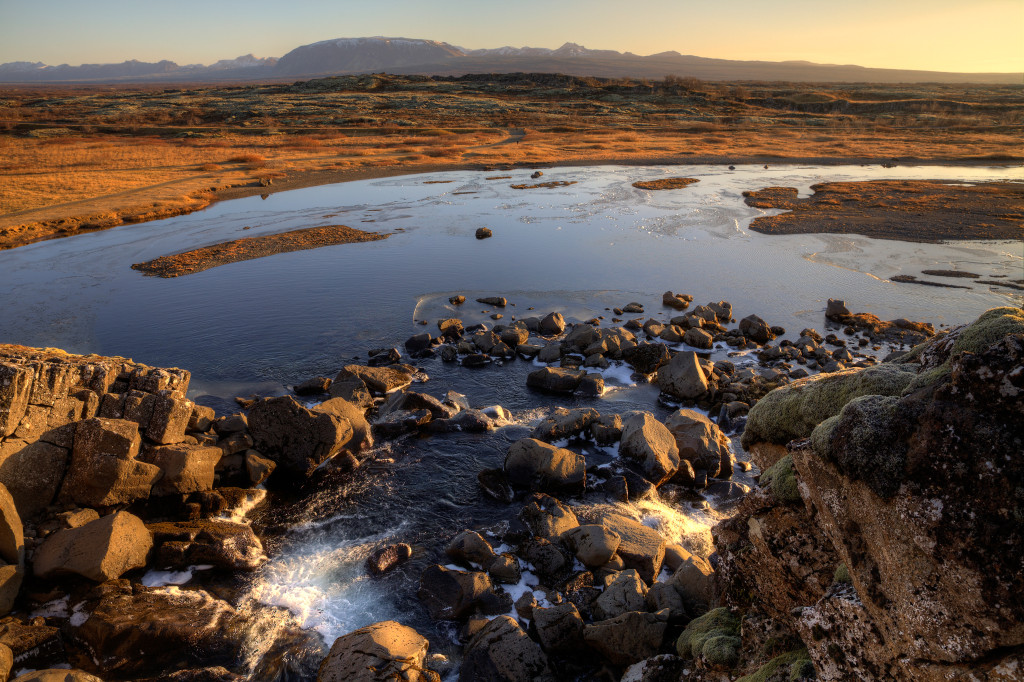 No less remarkable is the geology of Þingvellir. Iceland is probably the only place in the world where a mid-ocean ridge can be seen on land. The Mid-Atlantic Ridge is a submarine ridge located along the floor of the Atlantic Ocean that wraps around the globe and is geologically significant because it marks the boundary where the North American and Eurasian tectonic plates meet and separate. In other words, it is a crack in the earth that divides the continental plates of Europe and North America. The place where the Mid-Atlantic Ridge is best visible above sea level is at Þingvellir. 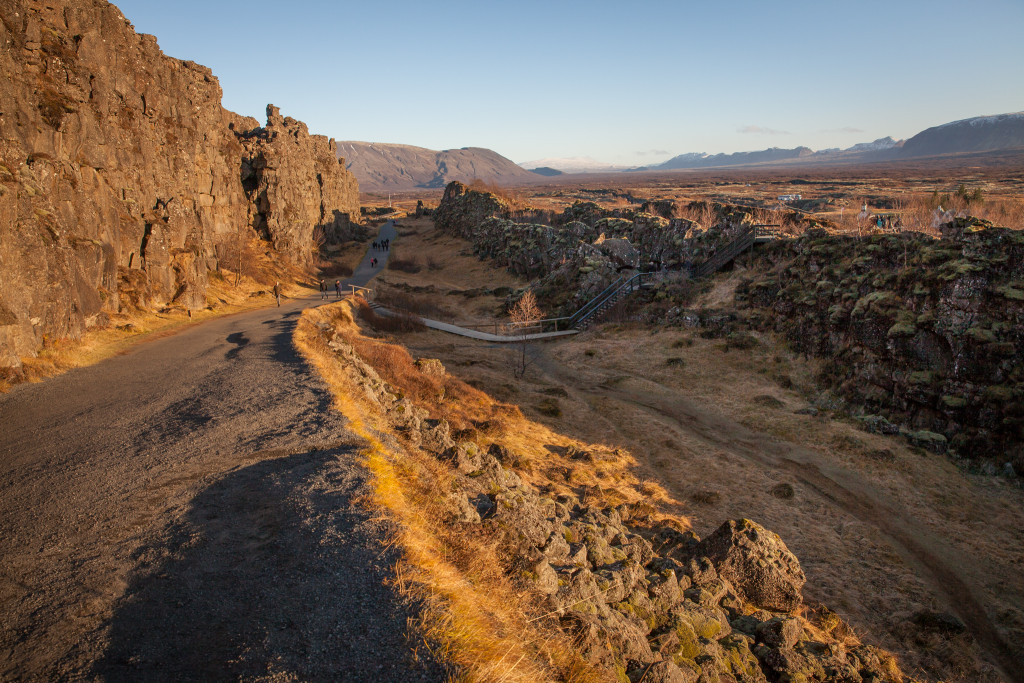 The North  American plate on the left and the Eurasian plate on the right. A boardwalk was constructed at this park for visitors to walk down the middle. 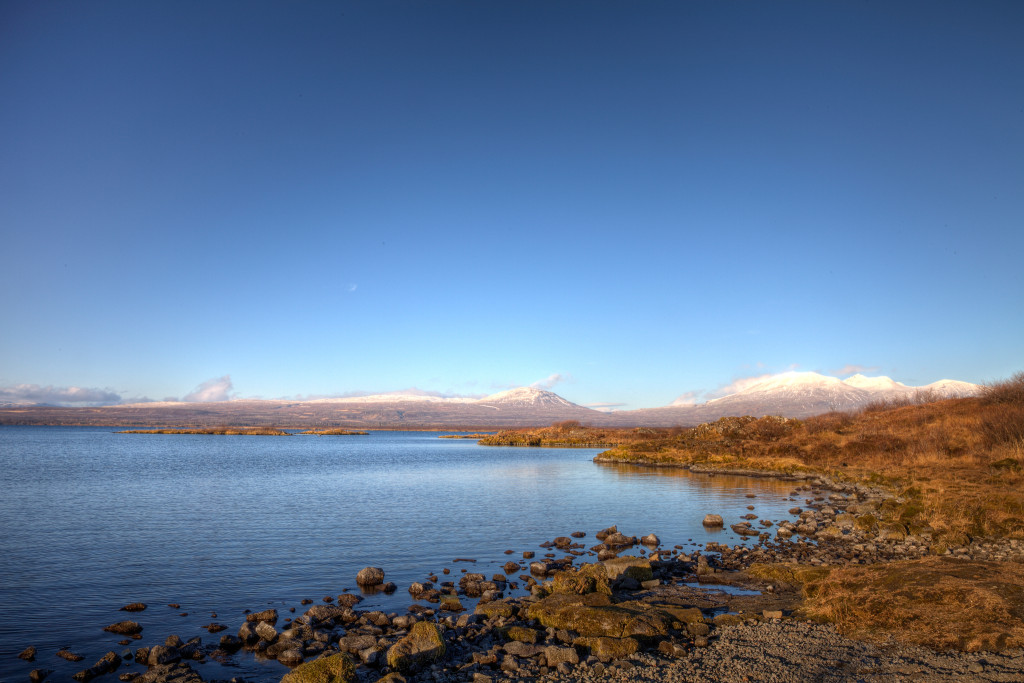 Self-driving the Golden Circle circuit rather than joining an organized tour allows you stop anytime you want or head off to explore side roads. The route is easy and is clearly marked. 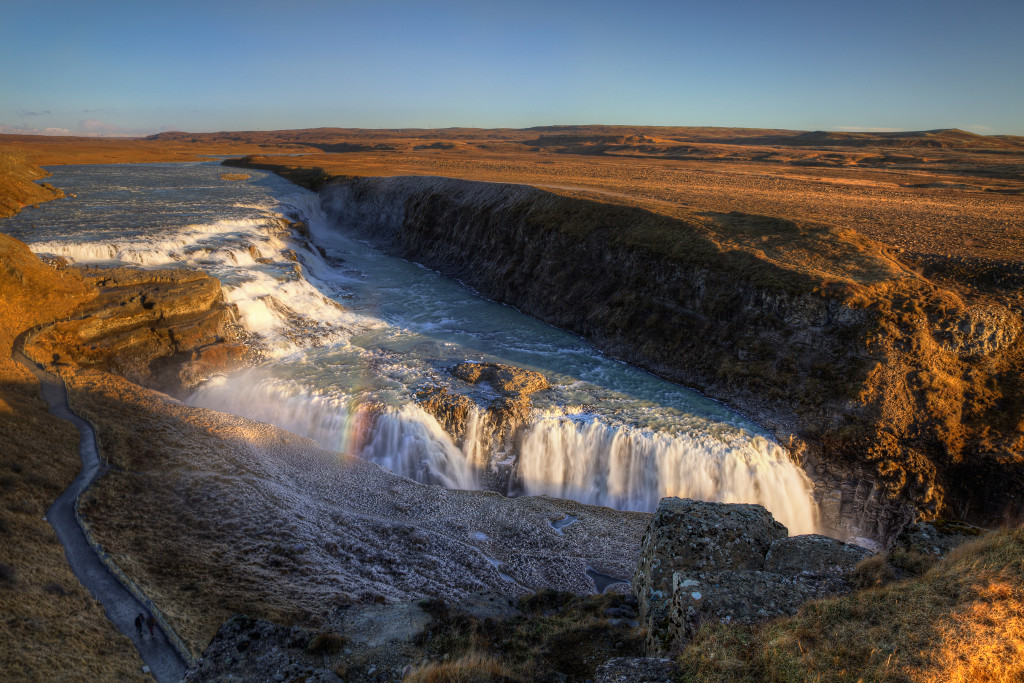 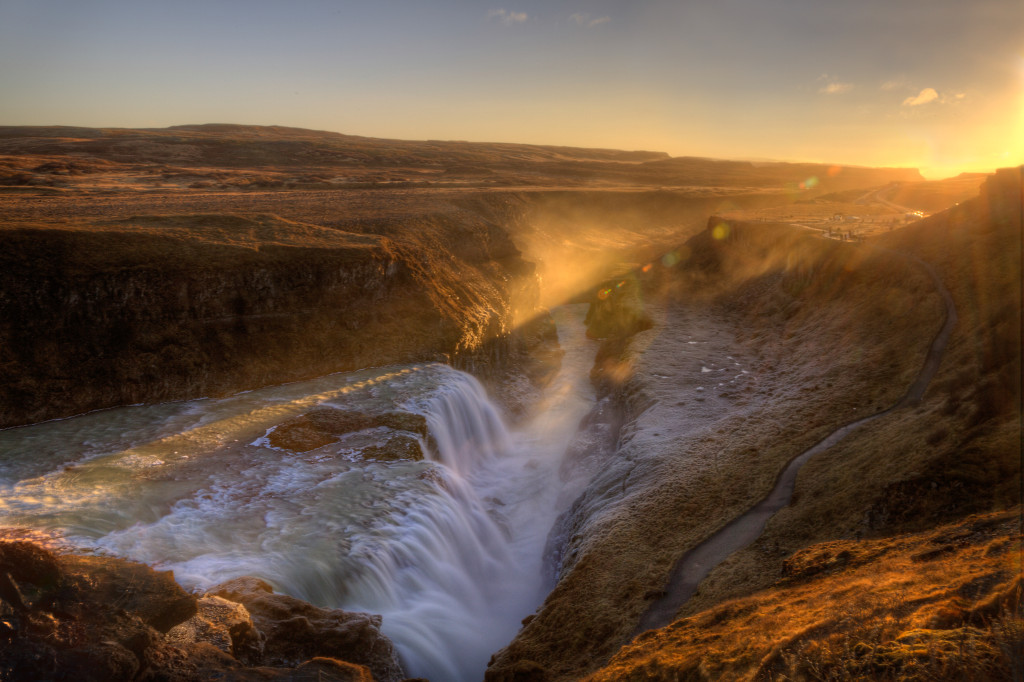 Legend has it that local landowner Sigríður Tómasdóttir stopped Gullfoss becoming a Hydro-electric station by threatening to throw herself into the falls. A stone stands at this place as a memorial to the woman who saved Gullfoss. 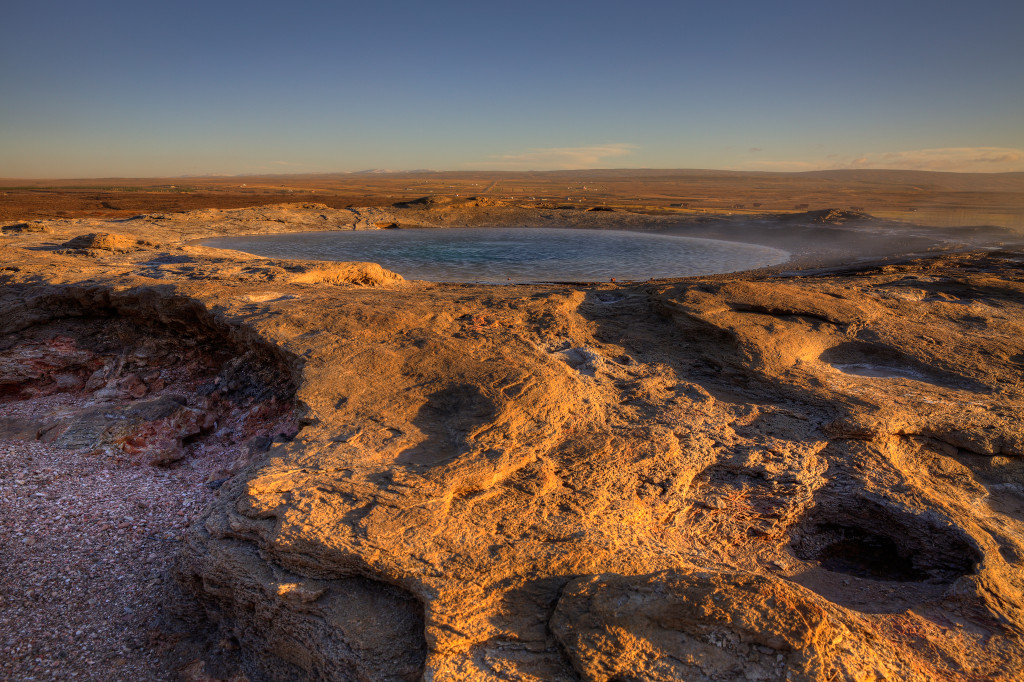 Geysir is the oldest known geyser and one of the world’s most impressive examples of the phenomenon. The name of the place actually gave us the word ‘Geyser’. In Icelandic, ‘Geysir’ means ‘to gush’. This spouting hot spring was once known to shoot boiling hot water and steam up to 70 metres into the air. Although inactive for a long time, sporadic eruptions have apparently occurred throughout the last decade so you just never know when Geysir may roar to life again. 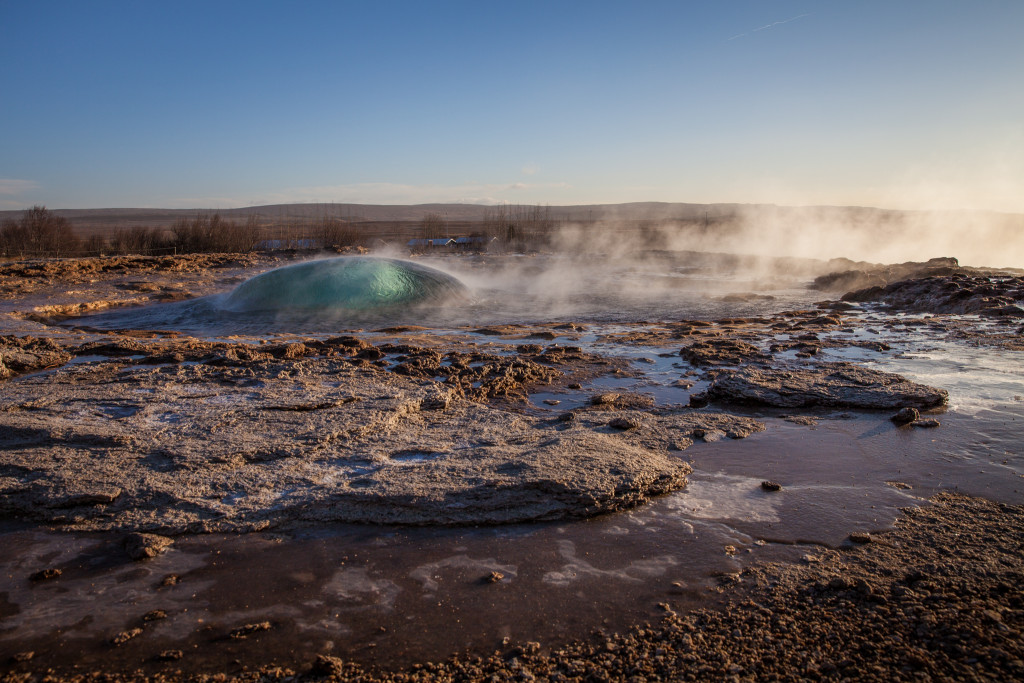 Strokkur (Icelandic for “churn”) on the other hand is a very active geyser, right next to Geysir. This spouting hot spring regularly erupts and shoots a stream of hot water and steam anywhere from 25 to 35 metres into the sky ever 15 minutes or so. 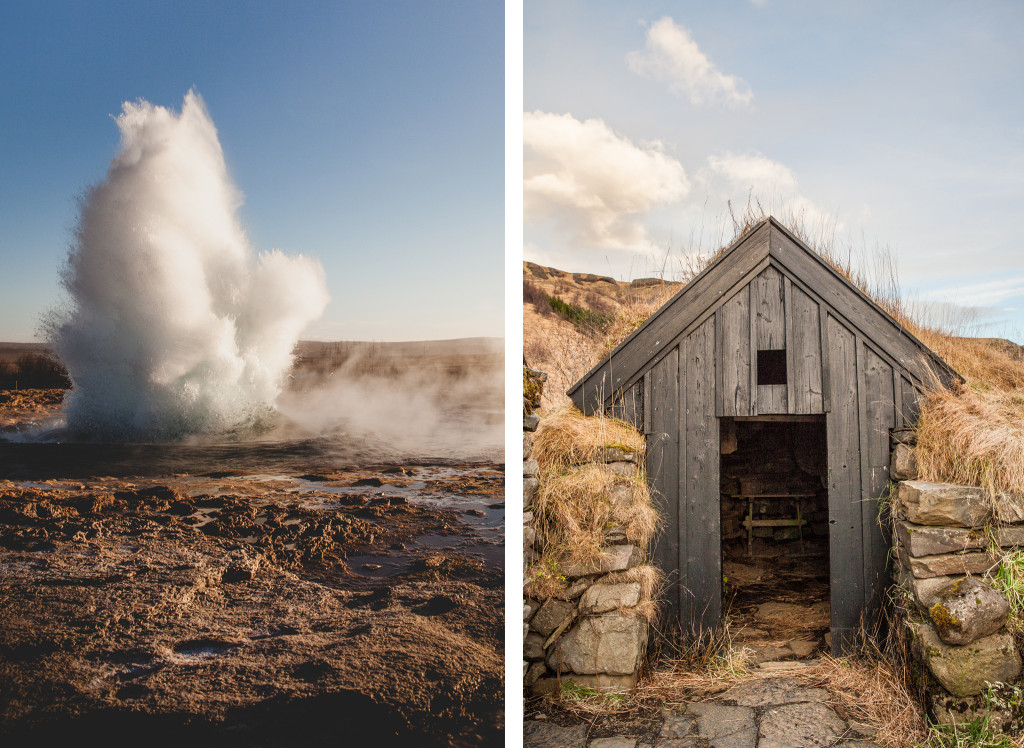 On the left,  Strokkur in action. On the right, a turf roof islandic house at The Skógasafn in South Iceland. 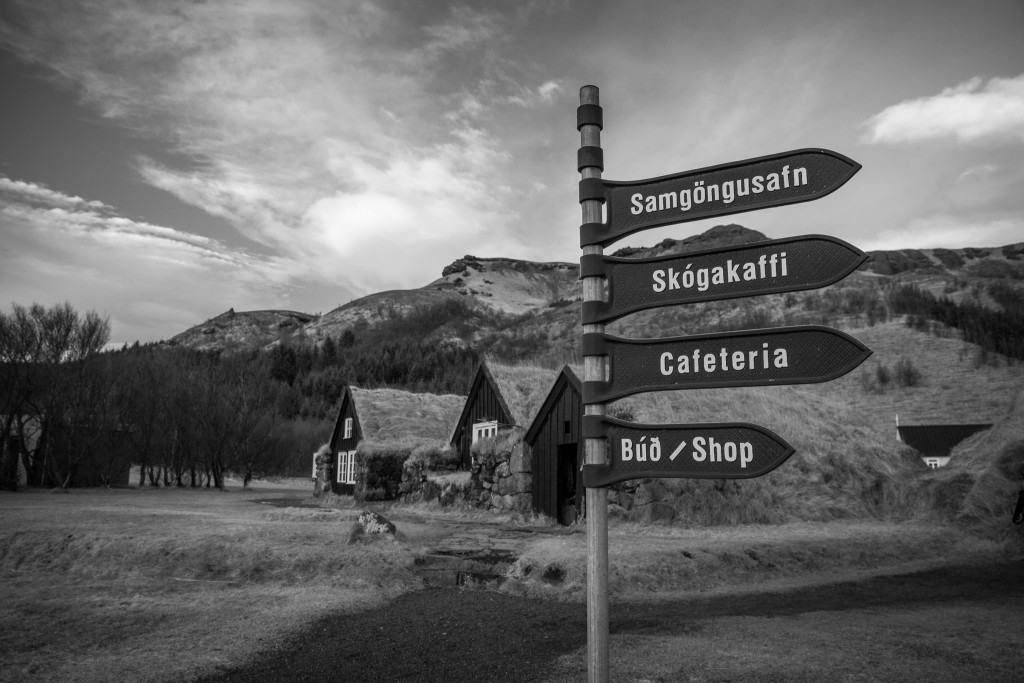 Skógasafn (The Skógar Museum) was founded in 1949 and preserves the cultural heritage of South Iceland.  A key part of the Museum’s work has been the reconstruction of several old farmhouses, so visitors can see how Icelanders lived in the past. 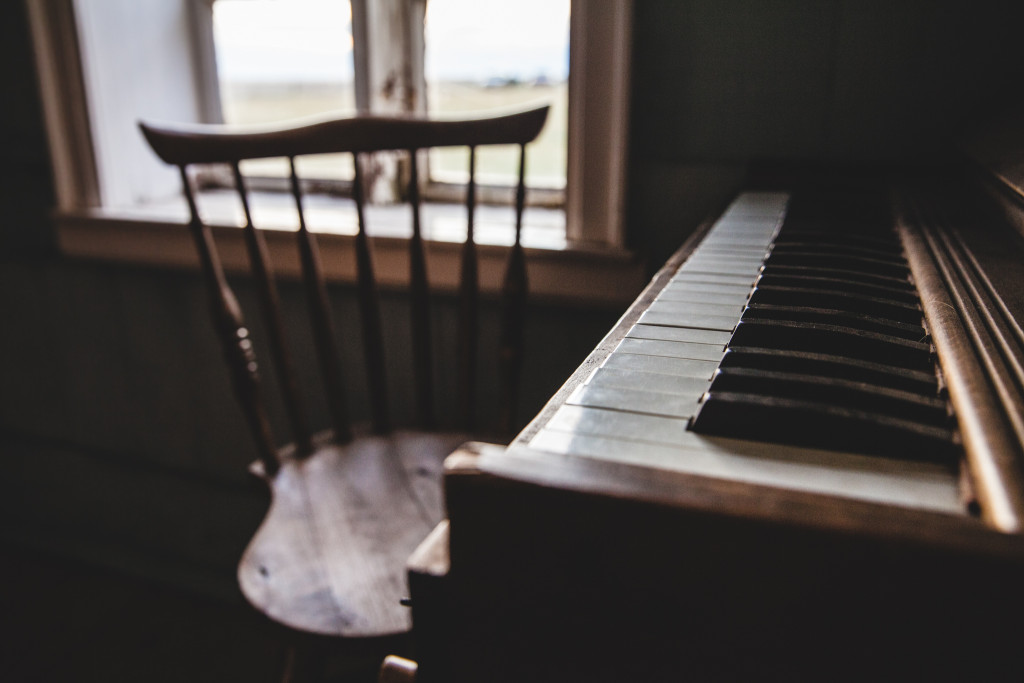 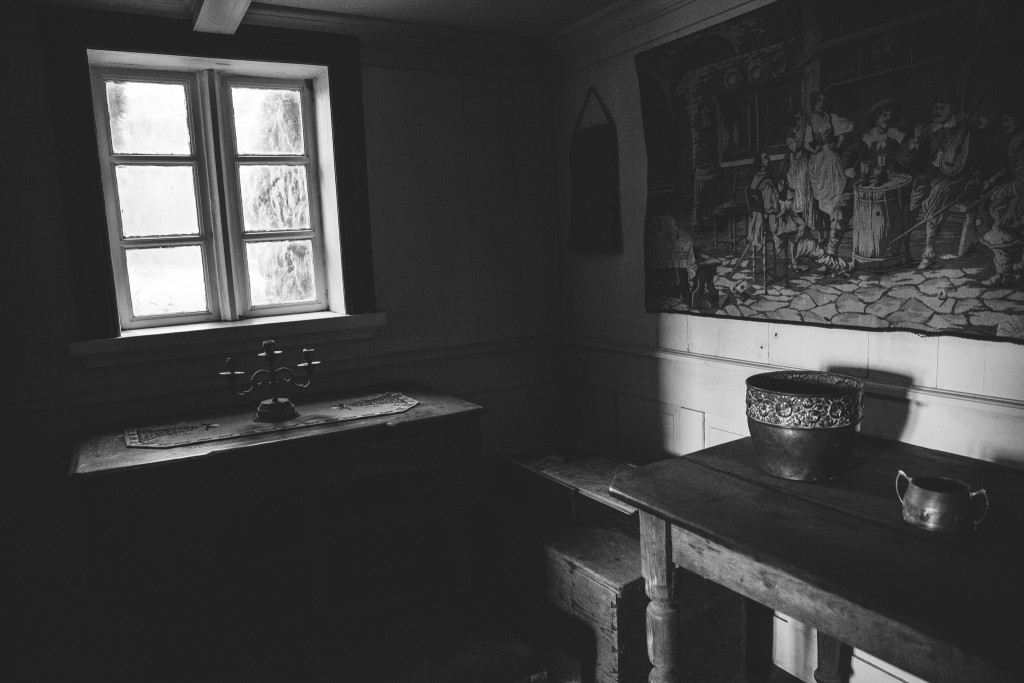 The Skógar Folk Museum preserves the cultural heritage of southern Iceland through its collection of tools and equipment, handicrafts, old buildings, books, manuscripts, and documents. 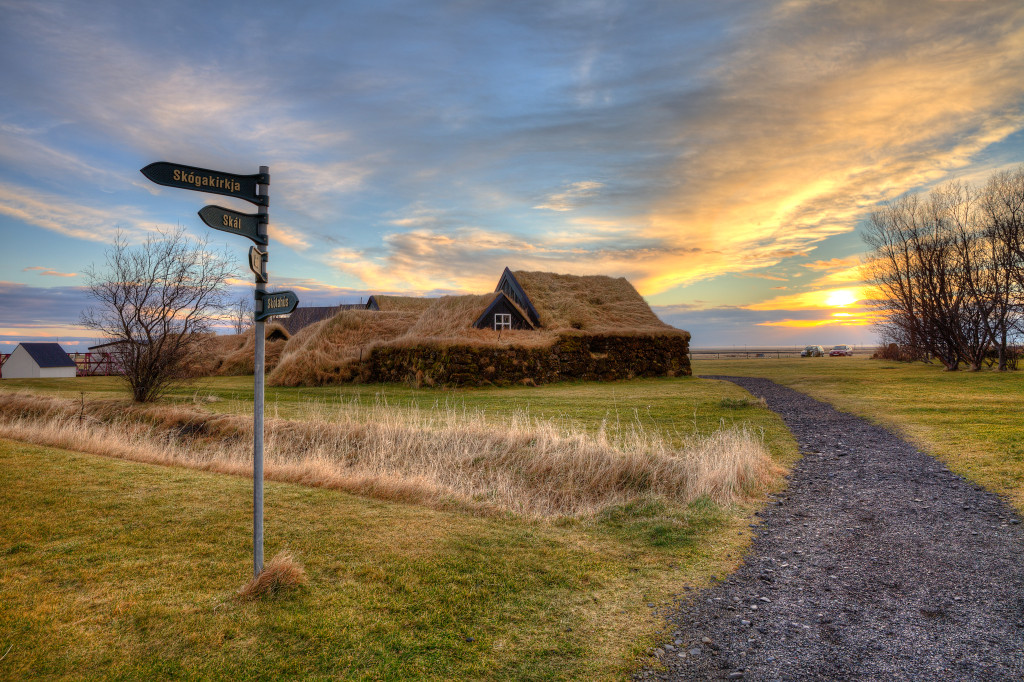 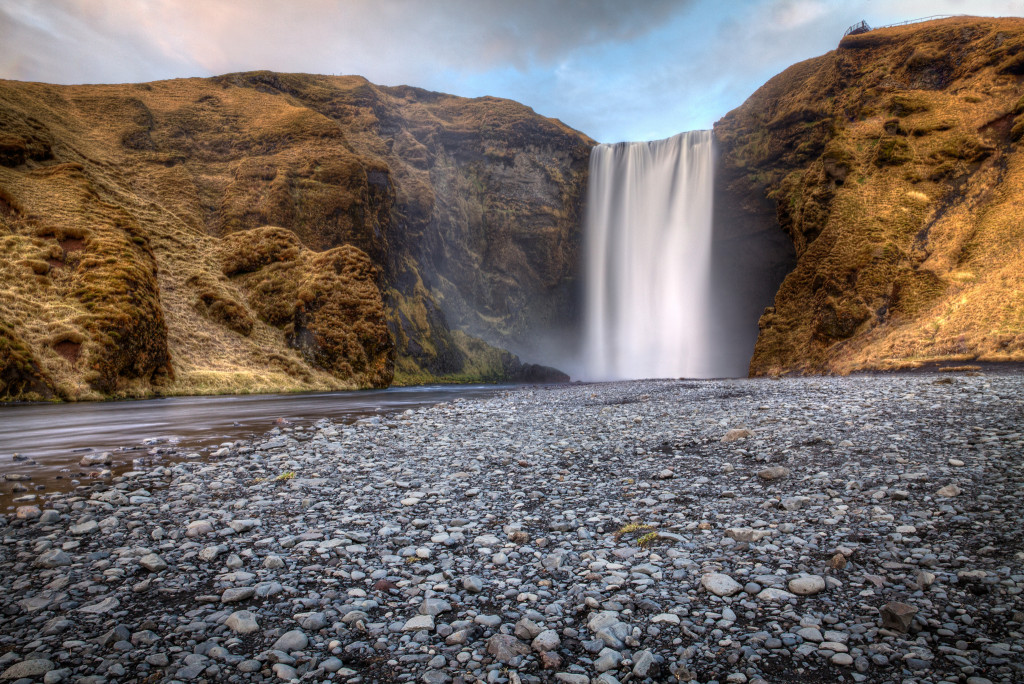 Close to The Skógar Folk Museum is Skogafoss, one of the most popular waterfalls in Iceland. Known legend says that a buried treasure lies in one of the caves behind Skogafoss, placed there by Þrasi Þórólfsson, the first Viking settler in Iceland. Skogafoss is unique because the waterfall comes directly from two glaciers. 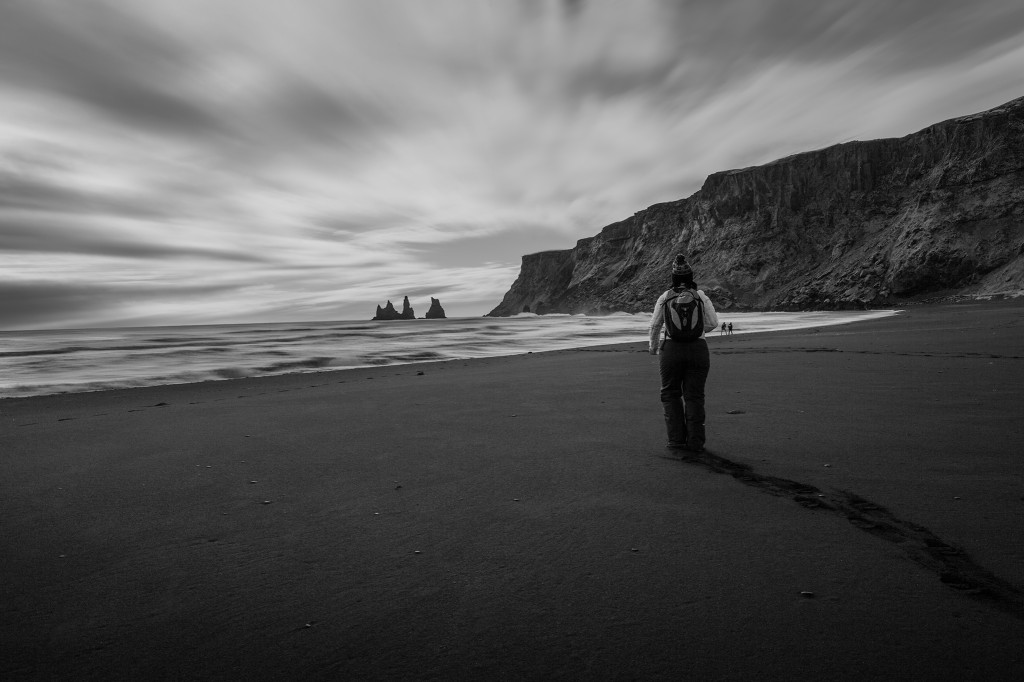 Vík – Half an hour from Skogafoss is the southernmost village in Iceland, called Vík. The village is home to less than 300 inhabitants and to one of the world’s most beautiful black basalt sand beaches. There is no land mass between Vík and the arctic which leaves it prone to intense weather and rough seas. 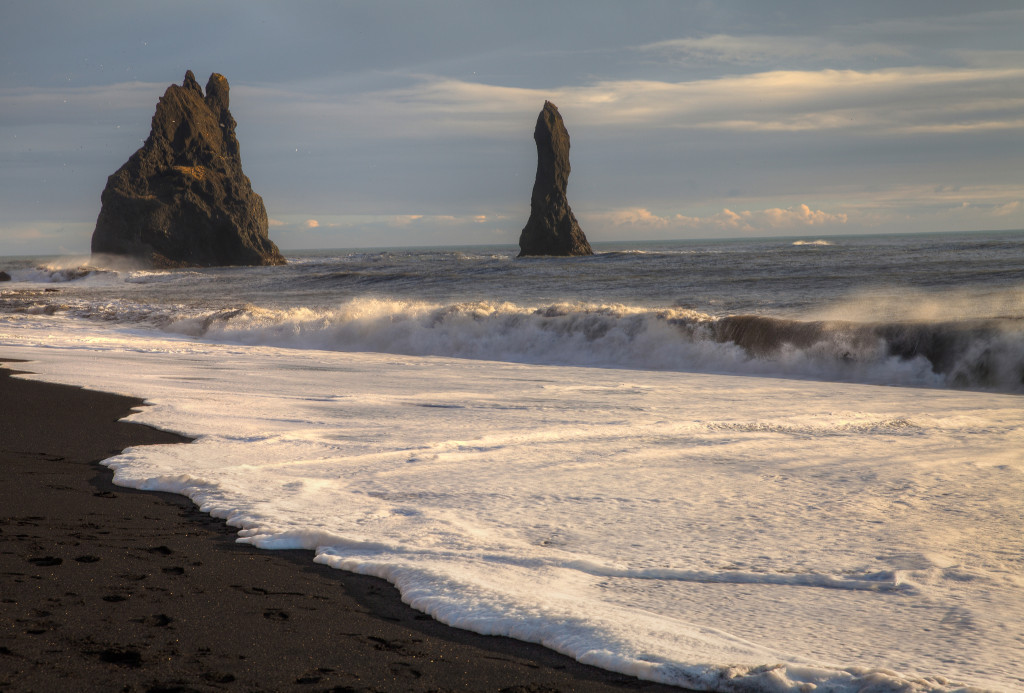 Vík lies directly under the Mýdalsjökull glacier which lies atop the Katla Volcano. The color of the sand was likely created by hot lava flowing into the frigid ocean, causing it to fragment into little pieces. 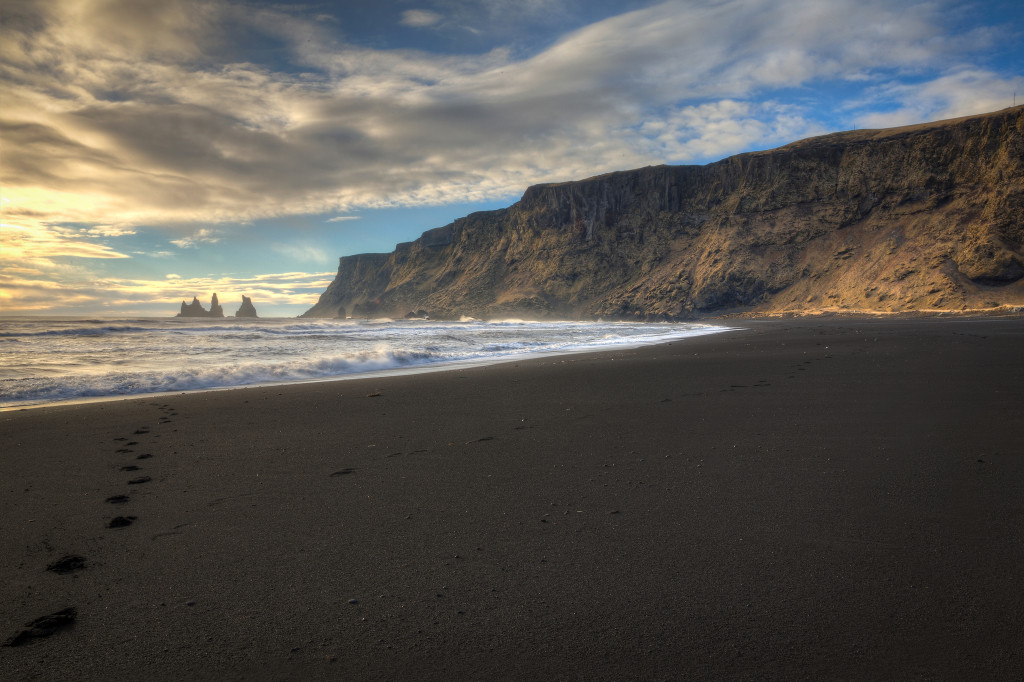 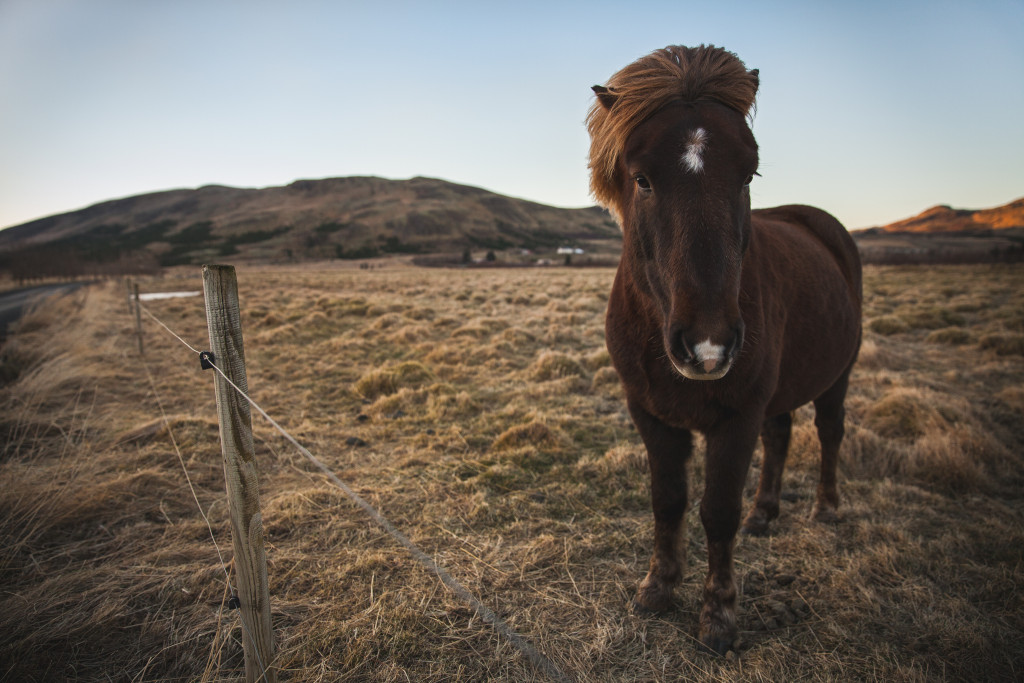 One of Iceland’s claim to fame is the Icelandic horse. The Icelandic horse is a relatively small breed compared to other breeds and is known for its sturdiness and extremely long lifespan. It is thought to be descended from the North European Forest Pony and the Celtic Pony. This horse has played a key role in the life of Icelanders from the beginning. 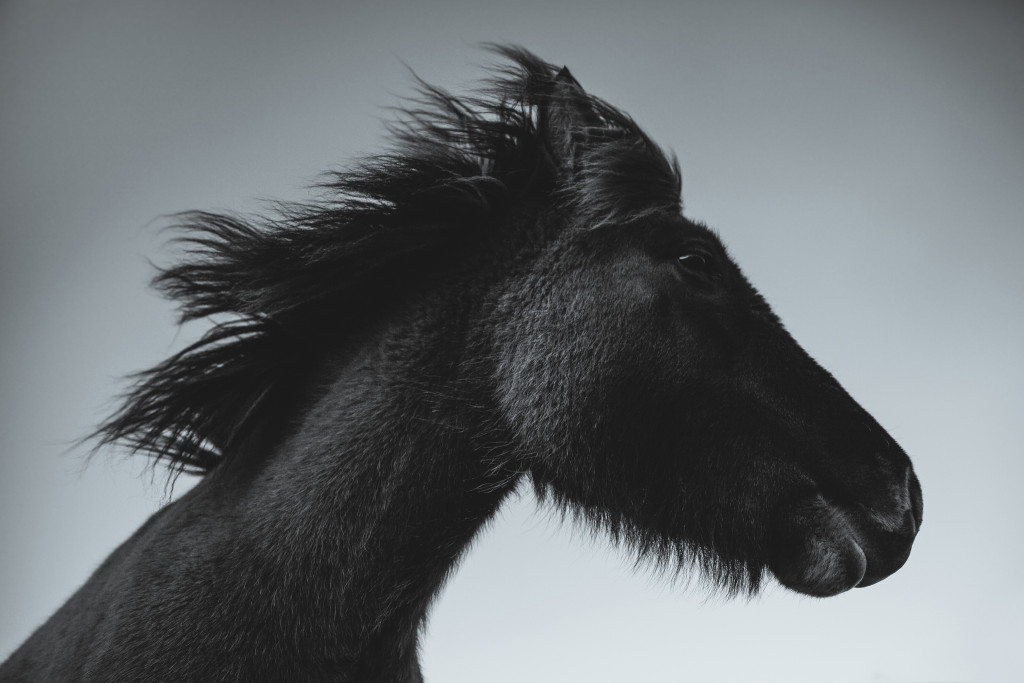 The Vikings used these horses for transportation, warmth, work, and occasionally for food. This horse was a vital asset to the settlers, and became a major part of their culture. 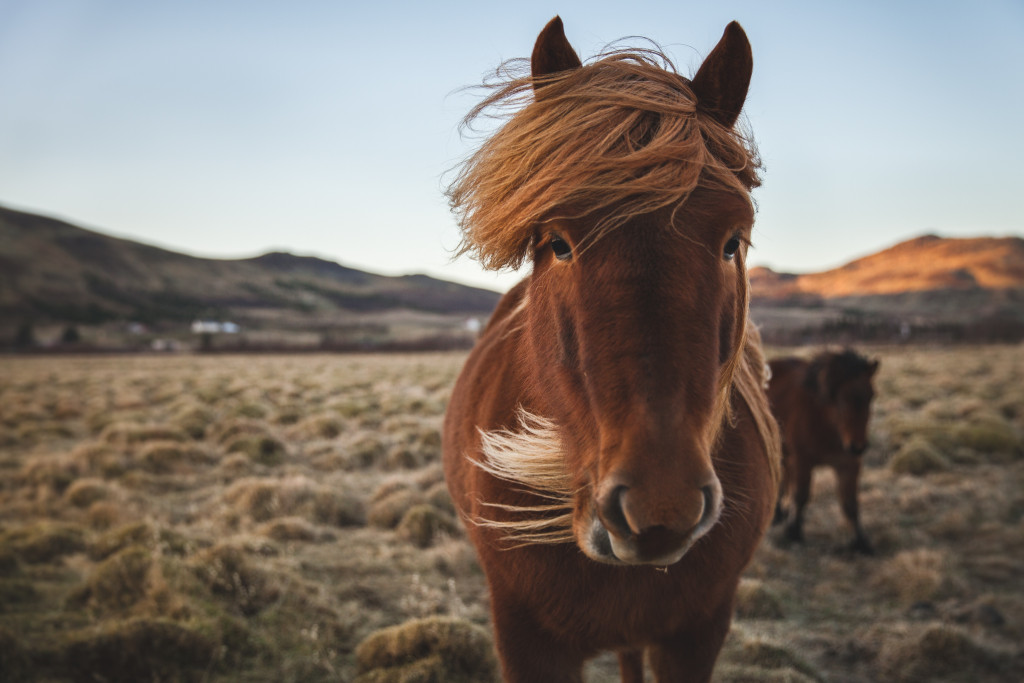 Importing horses to Iceland is prohibited and if a horse leaves Iceland it cannot return. Icelandic horses have not been exposed to the diseases that other horses suffer from, and as such have no resistance to these diseases. For this reason, there are strict laws preventing horses from being transported into the country. 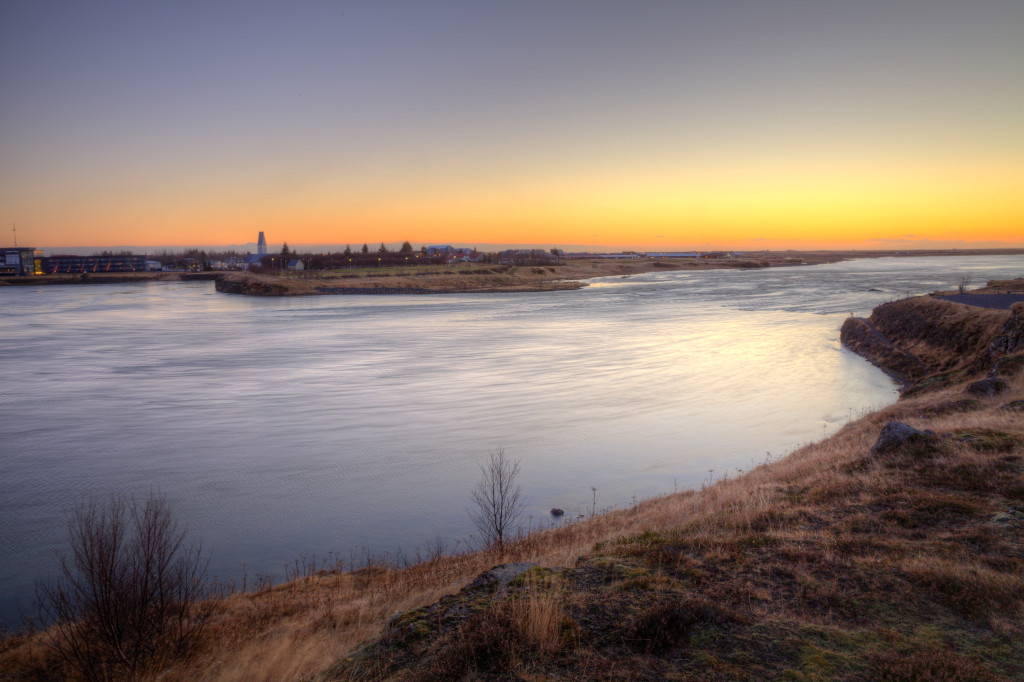 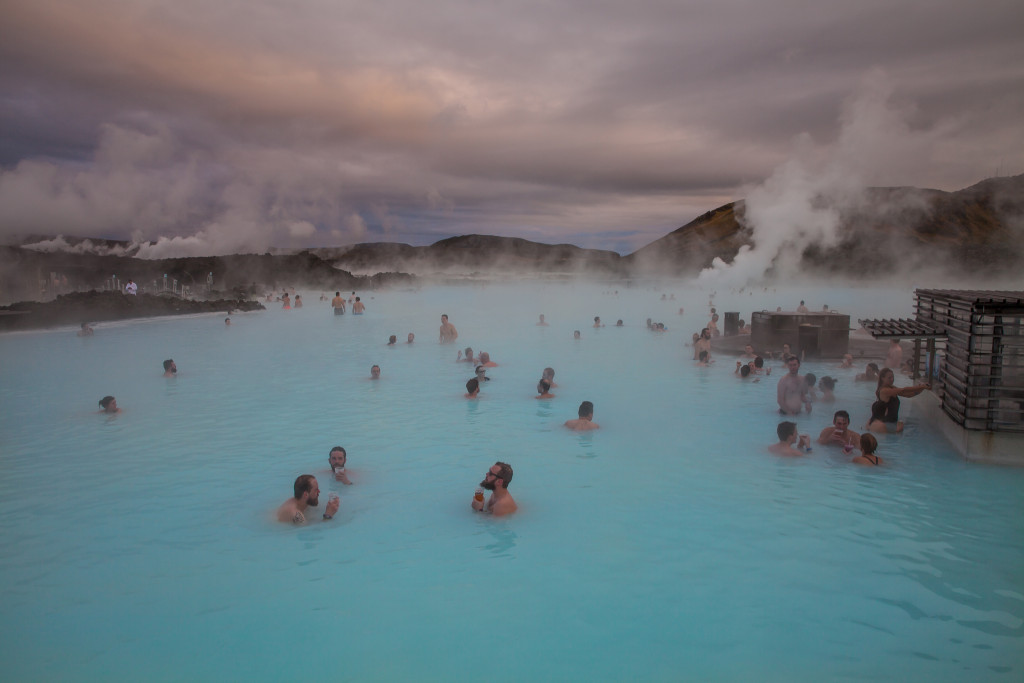 Blue Lagoon – just a few minutes from Keflavik International Airport, is a highly popular destination for visitors to Iceland. In the middle of the flat black lava fields of the Svartsengi National Park, the huge, outdoor lagoon is filled by heated geothermal water which comes from 2,000 meters below the surface of the earth. It is full of minerals, silica and algae and is especially good for the skin and relaxation. 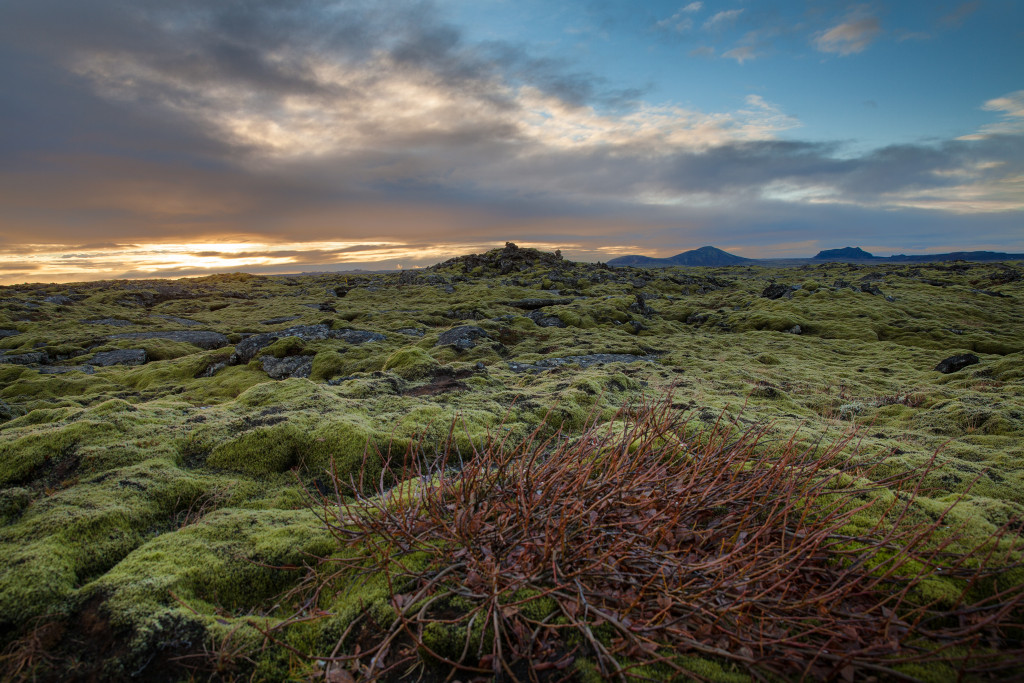 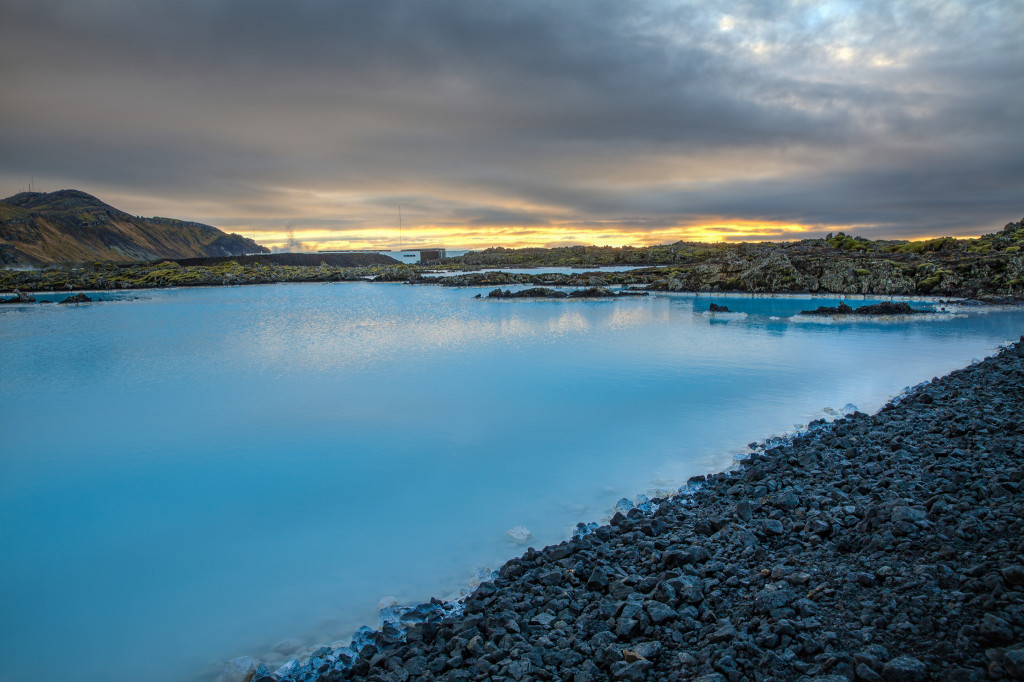 Svartsengi Geothermal Plant – Blue Lagoon is the result of an environmental accident during the installation and operation of the Svartsengi geothermal power plant in 1976. The spill created a surreal pool of blue water, geothermal seawater, near the plant and people started to bath in the water. Over the years, word spread of the healing effects of the lagoon’s water. The Blue Lagoon company was established and the bathing facility was opened for the public. 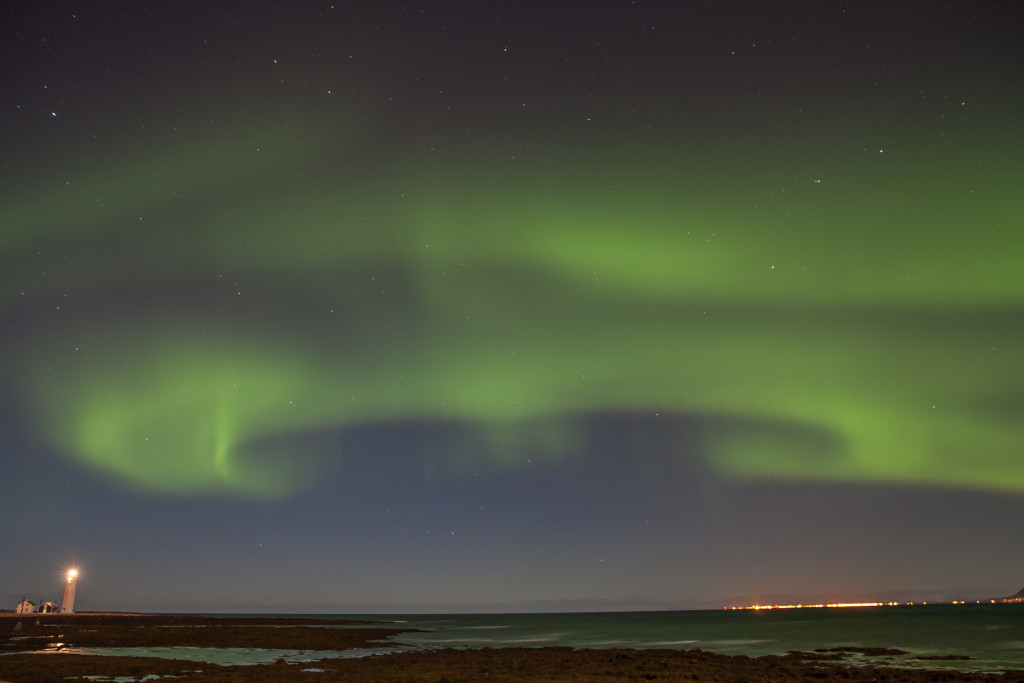 The Northern Lights (Aurora Borealis) are one of the biggest draws to visiting Iceland, however they are also one of the most elusive and unpredictable attractions this country has. Although it would be great to easily pinpoint a how to see them, there are a lot of variables to consider for seeing them: season, weather, length of stay, location and luck. The Northern Lights were one of my dreams but chances on seeing them were little, staying only three nights in Iceland.  I got really lucky to see them during my first attempt. The best season to see the northern lights in Iceland is from September to mid-April – these are the months where there are full dark nights. 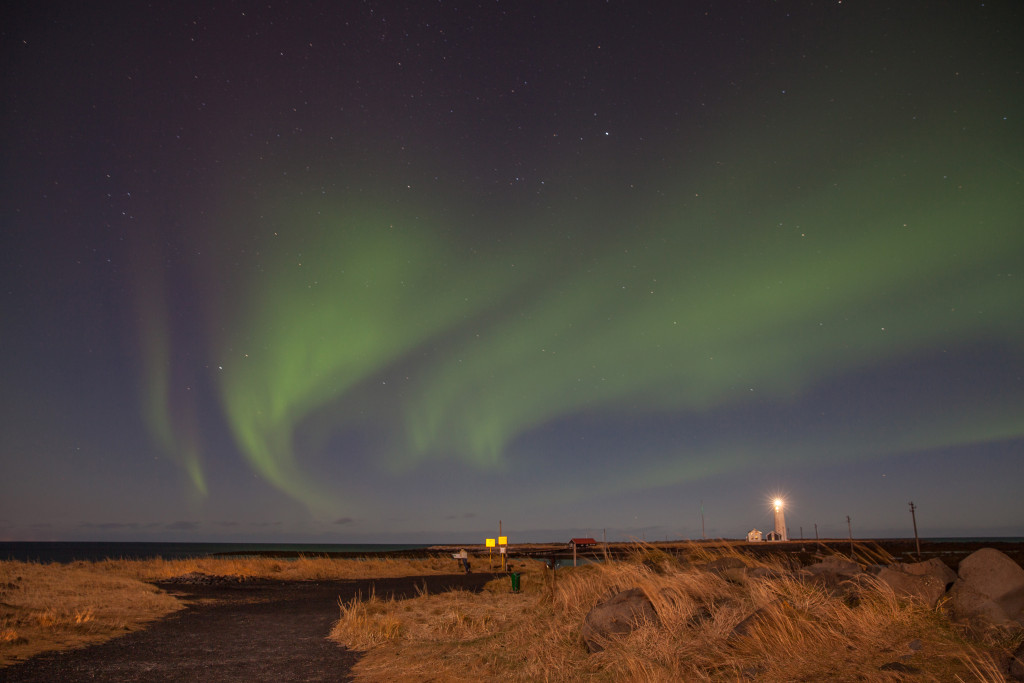 Grótta Lighthouse – just five minutes away from the center of Reykjavik. On a clear night, this is the best location to look for the Northern Lights inside the Reykjavik area, without having to leave the city. 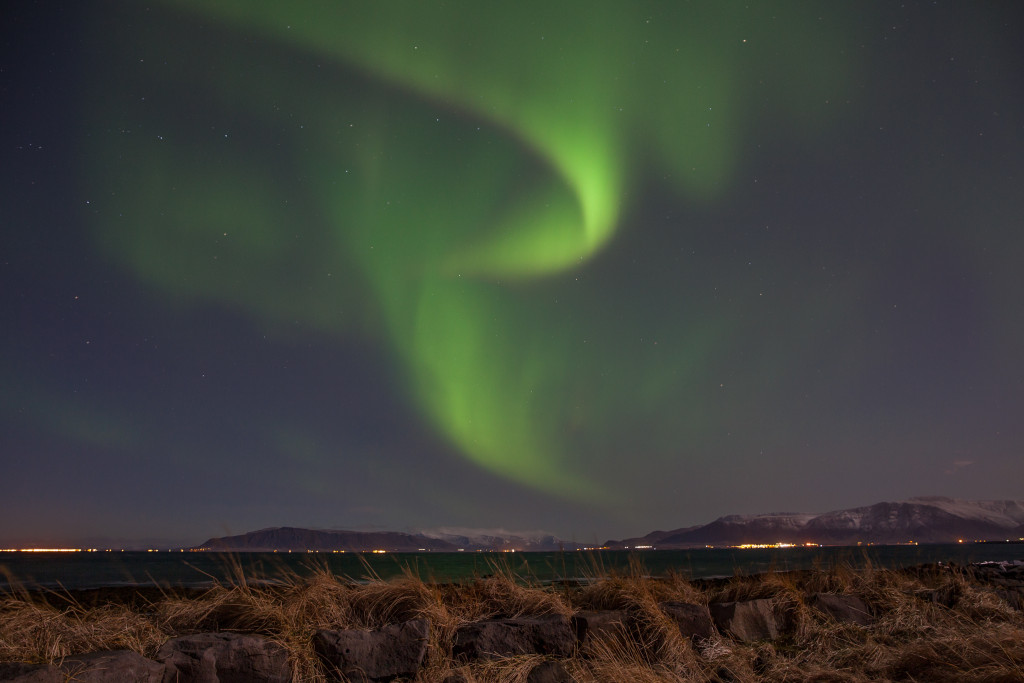 Iceland is often described as apocalyptic and is like you’re exploring the surface of the moon. In  fact in the early 1960s, a group of Astronauts from NASA preparing for the first moon landing went to Iceland to practice in an environment similar to what they would encounter on the moon.

There is truly no place on Earth like Iceland. Being there in person, exploring its many diverse landscapes and seeing so many wonders in only three days makes you feel like you are exploring a distant world. Iceland is really a magical place. Look around and you’ll see glacial valleys, volcanoes, black sand beaches, waterfalls, lava fields and fjords. The people are warm and welcoming and make the experience of visiting Iceland a real pleasure.

« Croatia: a gem in the Mediterranean